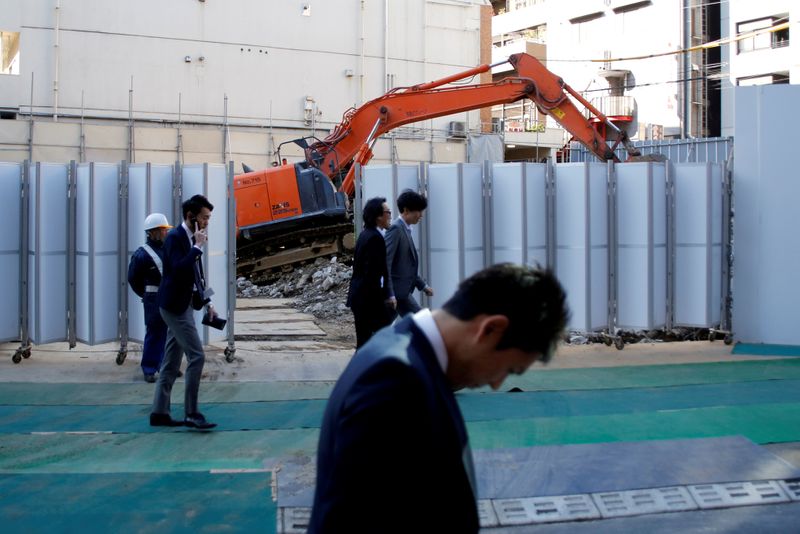 By Kantaro Komiya and Tetsushi Kajimoto

TOKYO (Reuters) -Japan’s core machinery orders rose in July after a dip the previous month, a sign corporate spending is perking up despite the wider hit to the economy from the pandemic.

However, the weaker-than-expected rebound may add to concerns about the strength of Japan’s recovery, which has largely relied on manufacturers and other export-oriented businesses as curbs dampen domestic consumption.

Core machinery orders, a highly volatile data series regarded as a leading indicator of capital spending in the next six to nine months, rose 0.9% in July from the previous month, weaker than the 3.1% gain seen by economists in a Reuters poll.

“The manufacturing sector is strengthening with the tailwind of recovery in the global economy, while non-manufacturing is weakening with downside pressures from the worsening COVID-19 outbreak – the contrast is becoming clearer,” said Masato Koike, an economist at Dai-ichi Life Research Institute.

The Japanese economy is at risk of slipping back into contraction in the current quarter as the COVID-19 pandemic hits private consumption and manufacturing.

Adding to worries about the outlook, manufacturers’ mood fell to a five-month low in September, the Reuters Tankan, showed.

The mixed data comes as the ruling party’s leadership race heats up. The winner of the Liberal Democratic Party’s Sept. 29 leadership contest is expected to become prime minister and will need to lay out a growth strategy to get cautious Japanese firms to spend their massive piles of cash https://jp.reuters.com/article/japan-economy-capex/update-1-japans-capex-rises-for-first-time-since-covid-19-outbreak-idUSL4N2Q21KZ.

External orders, which are not counted as core orders, rose 24.1%, rebounding from the previous month’s 10% drop thanks to robust demand for semiconductor-making machines.

“External orders turned out good, but it’s a volatile measure and does not seem to ex