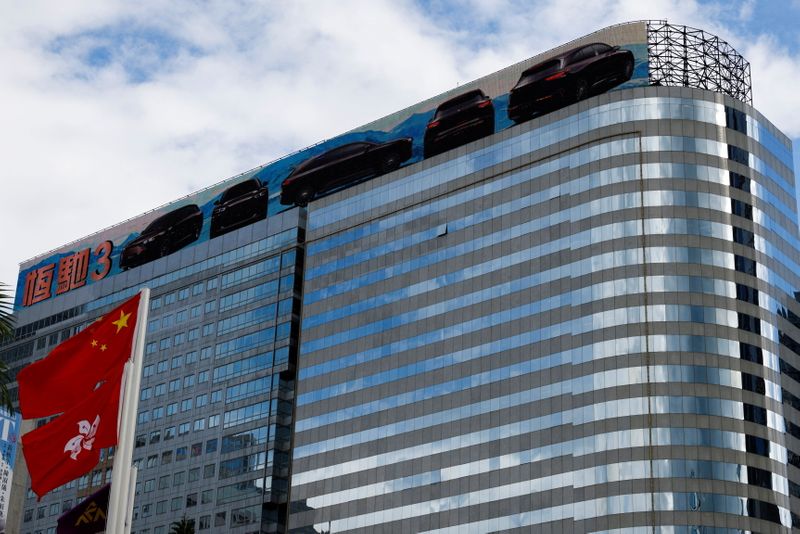 By Tom Westbrook and Andrew Galbraith

SINGAPORE/SHANGHAI (Reuters) -China Evergrande is teetering between a messy meltdown with far-reaching impacts, a managed collapse or the less likely prospect of a bailout by Beijing for what was once the country’s top-selling property developer.

Founded in Guangzhou in 1996, Evergrande has epitomised China’s freewheeling era of borrowing and building, but with liabilities of nearly two trillion yuan ($305 billion) its possible collapse looms as one of China’s largest for years.

Debt and land-buying curbs and hundreds of new rules have been imposed on Chinese developers over recent years as part of a push to cut financial risks and promote affordable housing.

Evergrande, which accelerated efforts to cut its debts in 2020 after regulators introduced caps, does not have any major offshore bond maturities until early next year but tardy payment of suppliers and interest on loans have brought to a head concerns that have long nagged at investors.

Now, without access to fresh funding, Evergrande cannot pay suppliers, finish projects or raise income, prompting it to hire advisors and warn of default risk. This, along with a buyout, break-up or bailout are the scenarios now being evaluated.

And while analysts have played down comparisons to the 2008 collapse of U.S. investment bank Lehman Brothers, which caused crises at counterparties and ultimately seized up global markets, some investors have similar contagion concerns.

“If as expected Evergrande is defaulting on its debt and goes through a restructuring, I don’t see why it would be contained,” Michel Lowy of banking and asset management firm SC Lowy, which focuses on distressed and high-yield debt, said.

“There are other developers that are suffering from the same problem of no access to liquidity and have extended themselves too much,” Lowy added.

Other worries include the exposure of banks and the determination of regulators to press on with property market reforms despite hints of damaging consequences.

Reaction has so far concentrated in the bond market and on Evergrande’s stock, as well as the stocks and bonds of other developers such as, among others, Guangzhou R&F Properties Co and Xinyuan Real Estate Co. ()

Evergrande shares are down about 90% in 14 months, while its dollar bonds are trading at 60-70% below par.

The most immediate concern is of a real estate crash rather than a Lehman-style financial crisis. An Evergrande fire sale could crush prices, causing leveraged developers to blow up and crippling a sector comprising a quarter of China’s economy.

“Lehman (was) very different as it went across the financial system, freezing activity,” said Patrick Perret-Green, an independent London-based analyst.

“Millions of contracts with multiple counterparties, everyone was trying to work out their exposure,” he said. “With Evergrande it depresses the entire real estate sector.”

Bank exposure is also wide and a leaked 2020 document, written off as a fabrication by Evergrande but taken seriously by analysts, showed liabilities extending to more than 128 banks and over 121 non-banking institutions.

But data suggests non-performing loans at commercial banks were a manageable 1.76% last quarter